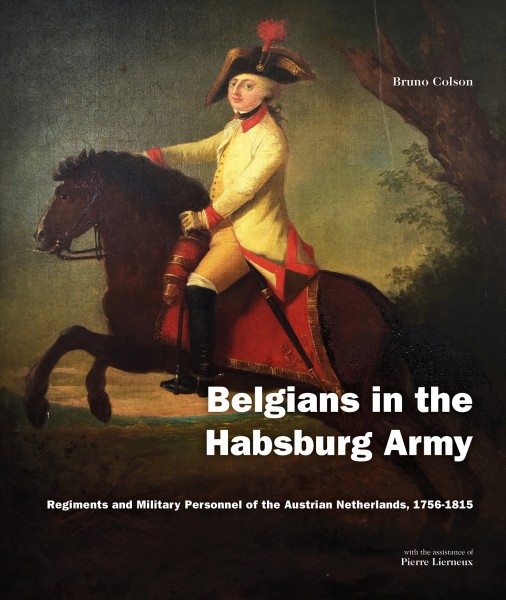 Belgians in the Habsburg Army

Regiments and Military Personnel of the Austrian Netherlands, 1756-1815

with the assistance of Dr. Pierre Lierneux

The Belgians in the Austrian Habsburg Army of the 18th century seem to have been completely forgotten. They enjoyed a very great reputation, however, and their numbers included seventeen field-marshals and about fifty generals. Belgian units were identified as such: they were called “Walloon”, recruited in the “Low Countries”. There were five infantry regiments, the free corps, a regiment of cavalry, artillery and engineers, a real embryo of a complete national army. These units distinguished themselves during the Seven Years’ War (1756-1763) against Frederick II’s Prussians. The Austrian victories of Kolin, Hochkirch, Domstadtl and Adelsbach, among others, were due in large part to them. Against revolutionary France, the “national regiments” - as they were called in the Austrian Netherlands - were notably engaged at Neerwinden, Valenciennes, Fleurus, Wurzburg, Stockach, Trebbia and Marengo. Beyond the glorifying historiography of the 19th century, the archives and the testimonies of their opponents confirm their value and professionalism.

The Belgian contribution was also intellectual, which was never sufficiently recognised. Prince Charles-Joseph de Ligne, as we know, was arguably the most important Austrian military thinker of the 18th century, but many other Flemish, Walloon and Brussels officers were employed by the Habsburg army for their talents as tacticians, engineers, draftsmen or cartographers. There was a Belgian specificity related to the advanced education and material prosperity of the Netherlands within the multiple possessions of the Habsburgs.

This book tells the story of all these unjustly forgotten men in a completely new way, drawing

not only on first-hand sources but also on an iconography never collected before. This is

all the more valuable because the Austrian monarchy did not subsidise many “battle paintings”, as was done in France. Nor, unlike Prussia, did it see to it that uniforms of its armies were preserved.

The Royal Museum of the Army and Military History in Brussels, however, holds a large amount of material, printed and manuscript evidence from that period: it is all on display in this book. The castles of Belgium, in particular the Château Beloeil, have authorized the reproduction of their family treasures: portraits, colour battle plans, weapons, pieces of equipment and uniforms. The University of Namur holds in its library two collections of ancient works relating to Charles-Joseph de Ligne, field marshal and writer. The Museum of Military History in Vienna joined the adventure with other Austrian, Belgian, Luxembourg and German institutions to make this book a veritable catalogue of collectibles and the most complete pictorial sum on the powerful Habsburg army in the second half of the 18th and early 19th centuries.

Born in 1957, a full professor at the University of Namur, where he specialises in teaching the history of war and strategy. He has had published by the Namur University Press L’Art de la guerre de Machiavel à Clausewitz dans les collections de la Bibliothèque universitaire Moretus Plantin “The Art of War from Machiavelli to Clausewitz in the collections of the Moretus Plantin University Library” (1999). He has specialized in the study of the military thought of Prince Charles-Joseph de Ligne, of which he published, with Jeroom Vercruysse, the Journal de la guerre de Sept Ans “Journal of the Seven Years‘ War” (Paris, 2008). His most important publications relate to the Napoleonic wars: Le Général Rogniat, ingénieur et critique de Napoléon, “General Rogniat, engineer and critic of Napoleon” (Paris, Economica, 2006), Leipzig. La bataille des Nations, 16-19 octobre 1813 “Leipzig. The Battle of the Nations, October 16-19, 1813” (Paris, Perrin, 2013, Prix Premier Empire 2013 from the Fondation Napoléon), “Clausewitz” (Paris, Perrin, 2016, Literary Prize of the Cercle royal gaulois, Brussels, 2018). His Napoleon, De la guerre “Napoleon, On War”(Paris, Perrin, 2011) has been translated into English (Oxford), Spanish (Madrid), Portuguese (Rio de Janeiro) and Chinese (Shanghai).

With the assistance of:

Born in 1965. He took courses at the Royal Military Academy as part of his license at the Catholic University of Louvain. Curator of the uniforms and equipment collections of the Royal Army Museum in Brussels (1990-2000), in 2007 he wrote his doctoral thesis under the title L’uniforme militaire dans les Pays-Bas méridionaux et en Belgique jusqu’en 1915. Histoire institutionnelle et approche économique « The military uniform in the Southern Low Countries and in Belgium up to 1915. Institutional history and the economic approach.” He is now an expert detached from the Royal Military Academy as the head of the museological section of the Royal Army Museum (one of the sites of the War Heritage Institute) and a member of the Royal Belgian Academy of Fine Arts. His main publications: L’armée belge dans la Grande Guerre, “The Belgian Army in the Great War”, Vienna, Verlag militaria, 2 vol., 2015-2017; (with N. Peeters and Ph. Jacquij) « Lisolo na Bisu ». Notre Histoire – Onze Geschiedenis - Our History. Le soldat congolais 1885- 1960, “„Lisolo na Bisu“. Our History - Onze Geschiedenis - Our History. The Congolese soldier 1885-1960”, Brussels, 2010; (with V. Bras, G. Deploige, N. Peeters and P. Veldeman) Waterloo, le défi à l’Europe- Europa uitgedaagd - Europe Challenged, Brussels, 2015.